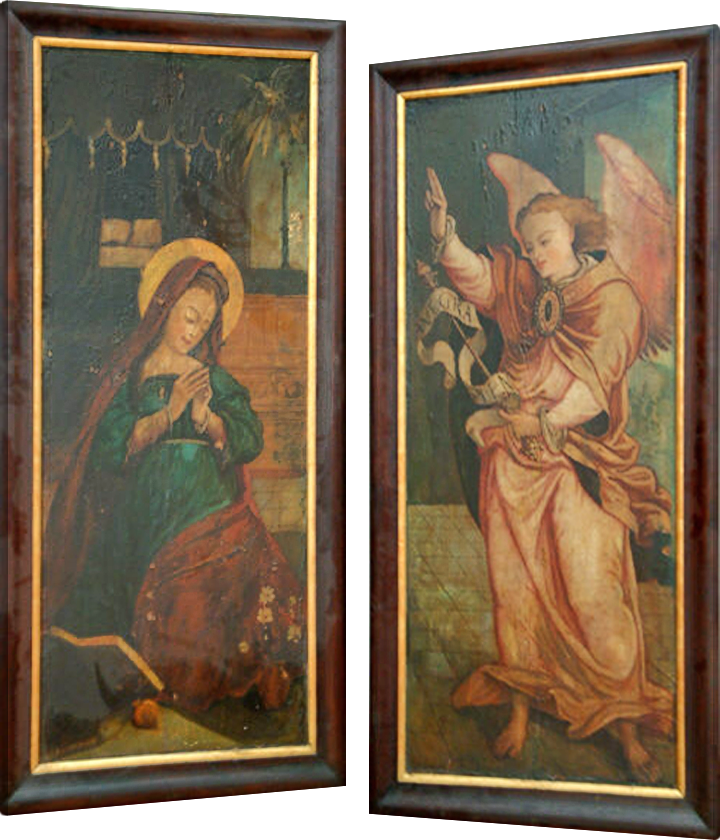 Together with the painting of the Angel Gabriel [which we’ll mention below], it is part of a set that may have been a diptych, the side panels of a triptych or, possibly, an altarpiece combined with other Marian themes.

The Virgin, kneeling before the prayer book, turns to our right side upon the arrival of the announcing Angel. Mary’s torso is therefore depicted in a frontal position, while her head is turning towards the heavenly messenger. Her face, portrayed in three-quarter view, is well proportioned, with delicate features and looking downward at the floor with half-shut eyes. Joining her hands, she is paying attention to the message that the Angel Gabriel is delivering.

On the top right corner we see the dove of the Holy Spirit. With its wings spread and raised high, it suggests the flight that brought it to the Virgin. Painted in shades of white, it is looking straight at Mary and it is surrounded by a halo formed by intense rays of light represented by loose and wide strokes.

In front of the future ‘Deiparous’, we see two books. One is closed and placed horizontally, while the other is open, possibly resting on a lectern that is not visible in the painting. Next to the books we see a pomegranate and, at the far right, the traditional flower vase, which in this case holds a bunch of six daisies.

It is possible to get a glimpse of the bed, where two white pillows stand out, and the canopy, with very dark crimson curtains and a valance whose fabric is cut into semicircles, hemmed with a double gold ribbon and tassels.

As the most important symbolic elements of the painting, we highlight the books that indicate that Mary was busy reading the Holy Scriptures when the announcing Angel appeared. A tradition which dates back to the Patristic period describes the young woman as meditating on the passage of the prophet Isaiah in which it is stated that a virgin would conceive and give birth to Immanuel (Isaiah 7:14), showing that, at that moment, Mary was fulfilling promises made about seven centuries earlier. On the other hand, the pomegranate, placed next to the books, can symbolize both the fruitfulness of Mary which, through her consent, allows the virginal conception of Jesus Christ, and the new life bestowed by Christ through his Death and Resurrection (the pomegranate tree is a symbol of the Resurrection in Coptic art), thus establishing a correspondence between the Annunciation-Incarnation and Redemption.

The Angel Gabriel is shown in the panel to the right, appearing behind Mary whilst she is busy reading the Old Testament texts. Standing with his left leg slightly bent, his dynamic clothes and hair reflect the movement that allowed him to make the journey to meet the young woman of Nazareth, although his wings, painted without much detail, are already in a resting position.

His face, portrayed in three-quarter view, shows a young Angel with delicate and very feminine features. He is looking directly at Mary, to whom he is delivering his message, a moment confirmed by the raising of the right hand in a praying gesture. The hands, the feet and the face are depicted with similar flesh tones. Gabriel’s greeting to Mary is expressed in the phylactery that is wrapped around the metallic sceptre held by the divine messenger in his left hand.

The place where the Angel Gabriel is standing corresponds to the entrance of Mary’s quarters, marked by the large opening, literally translating the passage of St. Luke that reads “And the angel came in unto her…” (Luke 1:28).

As the symbolic elements of this panel we highlight the following: the metallic sceptre, a symbol of the power and authority conferred upon the Angel Gabriel to carry out the noble mission of announcing to Mary the unique moment in the history of Mankind when the son of God would take on human form. Another symbolic aspect we should point out is the clothes worn by the Angel, which, due to their dignity, reinforce the noble character of his message.

PS: By choosing these pieces, associated with the announcement of the Saviour’s coming to this world, the Pius XII Museum wishes to get all who visit it, either in person or via the Internet, into the Christmas spirit, the true Christmas, whose meaning is the meeting of God with each and every one of us. May this be a very happy meeting, a harbinger of a 2020 filled with blessings of the Child God.

See all news
See all publications
See all works